So you’re probably wondering what has changed with the spar plugin, in a single word: everything.

So in order to understand why I have overhauled the spar plugin we need to go back to when I was debugging all of my plugins after my hiatus from the server. As you probably know the spar plugin is not the most… functional piece of software known to man. However, I do like a challenge and I set out to try and rid it of all the bugs present within it. I lasted 10 minutes. The spar plugin was one of my earliest contributions to the server, and when I looked at the code it was definitely noticeable. As well as this I had noticed with the introduction of friendly fist the spar plugin became redundant, because, let’s be real, the TP gain wasn’t much of an award.  So instead, I decided that I would completely rework the spar plugin in order for it to actually be something player’s would want to use.

The features of the spar plugin are as followed:

Spars consist of 2 teams trying to eliminate all of the members of the other team. Both teams have a leader who is able to invite and kick players to/from their team, if a team leader leaves the spar then the spar will be disbanded. Each team can have a maximum of 10 players inside of it, and the spar will start automatically when both teams are full. Friendly fire is disabled, so that you cannot harm your teammates.

The way the TP is calculated is that the average amount of the weakest players’ (the amount of which is how many players there are on one team) TP required to level a stat is calculated and then multiplied by 3. Then for each player in the winning team, a percentage of the TP is calculated and then awarded to the player – this percentage is individual to the player and is decreased each time the player wins a spar, until it reaches a minimum of 20%. This percentage gradually raises over time until it reaches 100%, every time a player wins a spar 20 minutes is added to the amount of time it’ll take until the player reaches 100%, with a maximum waiting time of 80 minutes.

The old spar system had 10% of the losing player’s TP required to level a stat awarded to the winning player, therefore the new system is guarenteed to yield more TP than the old one.

The following are settings the player who started the spar can change:

The players per team setting changes how many players there will be within a team.

For the location setting, there are places on the server set so that spars can take place there, if you set a location to a certain place when the spar starts it will teleport the participants to the location, where each team is placed in slightly diffent spots. If you don’t want to be teleported anywhere set it to “none”

The allowMystic settings lets you choose whether players can go into the mystic form during the spar.

The countdown settings sets how long the spar will wait from when the last player joins the spar until the spar will actually begin. It is between 5 and 15 seconds.

/spar listSettings or /spar ls
Lists the changeable settings of a spar, with their default values

/spar invite [player]
Invites a player into your team

/spar cancel [player]
Cancels the request sent to a player

/spar info
Displays the settings of the spar

/spar checkTimer
Checks how long you have left until you reach 100%, and what percentage of the TP you will be awards at the current time

I thought that since I hardly use the devblog, I might as well announce that I have started making a faction plugin (not a replacement more of an expansion), since I thought that it would be great if we could revamp factions in order to make it more appealing to be a part of and for wars to actually take place. We have some ideas about what we’re going to include, however, since its in early days I can’t give out any details, but, if you want you can make suggestions on what you want included into the replies and they may be added (depending on whether it will break the game or not).

Hi guys, I see you are hyped about RPGWeapons and have a lot of ideas about what I could add to it. Unfortunately, my small brain can’t remember all of these suggestions for the future, so would it be possible if you could post a comment on this post about suggestions? Thanks, bloo.

Hello Everybody! I have finally come back with a new plugin that I have been making for the last few months. This plugin adds an RPG aspect to weaponry, allowing you to level them up and get special attributes called “rewards”. RPGWeapons are soul bound to each player, meaning they cannot be given away to other players. RPGWeapons will become available in Hero Saga Chapter 1. The maximum RPGWeapon is 1000 where your damage will be 200k. These weapons are unbreakable and enchantments are removed upon hitting something. 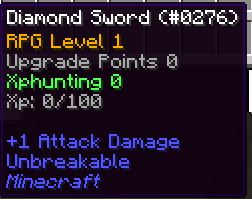 Rewards are effects on the weapon that are applied in certain events (blocking, attacking and killing). The rewards are separated into active (green) and toggleable (grey), active rewards are rewards that always work when they are meant to, toggleable rewards are defaultly innactive, you can toggle from active to inactive and vice versa using a command; the rewards that are toggleable are the blocking rewards and only 1 blocking reward can be active at any one time. They have a max level and a minimum required weapon level. You can unlock these by getting “upgrade points”; you receive one of these every 25 levels. 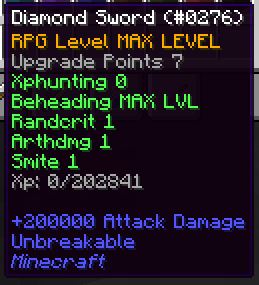 This reward is automatically on the weapon when it is created, showing as “level 0”, and is the only way of getting xp other than quests. It is an ‘attacking’ reward and you will get 1 xp with every hit on the enemy plus 2 per every level, the maximum being level 20.

This reward gives you a 20% chance of receiving a player’s head upon you killing them. This is the one of the only rewards that has a maximum level of 1.

This reward gives the player a 5% * the rewards level chance of giving the player a 50% damage boost against an enemy. It has a maximum level of 10.

This rewards are the RPGWeapons version of bane of arthopods and Smite, and do 1% times the level more damage of the weapon’s damage. Their maximum level is 10 each. 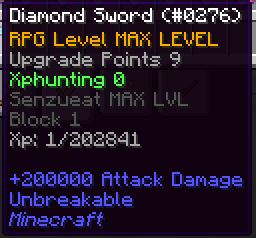 This reward allows you to eat a senzu bean by right clicking. It has a cooldown of 15 seconds to prevent you accidentally eating all of your senzus in one go. It has a maximum level of 1 and mininum RPG level of 50.

Allows you to change the item of your weapon to the itemID, for example if the itemID was 1 the weapon would turn into a block of stone

Allows you to set the weapon’s name to [name], you can put spaces inbetween words by using a ‘_’ for example: “example_weapon” would be “example weapon”. It can also be coloured using a  colour format https://minecraft.gamepedia.com/Formatting_codes#Color_codes using a ‘&’ instead of ‘§’, for example ‘&0’ would make the colour black.

Allows you to make a blocking reward active or inactive

Allows you to create an rpgweapon with a particular ID as long as the ID is between 1 and 3. It has a TP cost of 500k for the first weapon, 2 mil for the second and 20 mil for the third.

Allows you to delete one of your rpgweapons, so you can create it again.

Welp. I have a devblog I guess lol. I’ll post here about my projects current and new (as long as I’m allowed to ;)) . I might also discuss plugin suggestion ideas or make a poll on features within a plugin. If you do have any suggestions for future plugins please do put them in the forum: http://dbcserver.jingames.net/index.php/forums/forum/forums/suggestions-and-ideas/.

I hope you guys will enjoy this blog and I will try to post regularly. 😀

So you are reading this you are either a god/equivalent or you just have too much free time on your hands (I can relate), also you are here because you do not know how the rebirth plugin works. Who doesn’t amirite? Anywho, this will be a detailed post on how to use the rebirth plugin.

One feature of the plugin is to re-make your character without losing your stats. To do this you must use “/rebirth char”, this will send you to this screen: 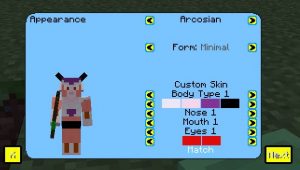 From there you can create your character to suit your needs.

You can also align your stats to create a decent build (to impress all of your friends). To do this you use the command “/rebirth stats [fromStat-toStat] [amount]” like, for example, “/rebirth stats str-con 500” to move 500 points from strength to con. The ‘-‘ is required since for whatever reason minecraft only likes three subcommands. At any point you can use “/rebirth check” to view what the stats will be once you have finished rebirthing. It will look something like:

When you have finished fiddling with your stats and character use “/rebirth confirm”, because if you somehow don’t and you complain to a member of staff about it, send you a strongly worded email. Once you have used that command you will get your stats back and lose all of your skills, bar godform. Also you will be placed within a 10 day cooldown, which you can check on using “/rebirth days”.

You will lose your skills because in the past users have put all of their points into mind and gotten more skills than they are supposed to, waited 10 days and then rebirthed again (yes they waited 10 days for having a few extra skills, don’t even ask).